We needed to block sand the first coat of primer with 320 grit and apply a second coat for that ultimate silky smooth finish.  Unfortunately, black paint shows every imperfection on the body.  It needed to be perfect.  Every bump and groove needed to be sanded smooth.  Even though it’s a tiny car, most of the weekend was spent block sanding.

I also (finally) removed the carpet.  It required unbolting the center console from the floor pan, held on by several annoying 12mm bolts.  Once that was removed, it opened up a path for the carpet to slide out.  Removing the carpet revealed how badly the seat anchors were.  The previous owner of this car decided it was a good idea to drill the seat through the floor pan to secure the driver’s seat instead of replacing the anchor brackets.  We’ll have to weld that hole in the floor pan shut and then undercoat it to prevent it from rusting.

By some miracle, the driver’s seat anchor brackets in the donor car were salvageable.  They will need some doctoring as shown in the pictures below.  The threading is intact which is the important part.  The next steps are to remove the rusted brackets, repair the donor brackets, and weld them in. 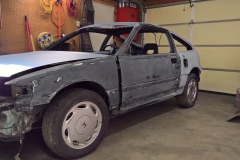 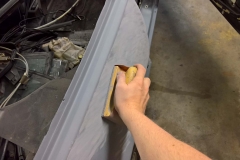 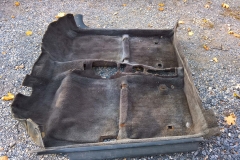 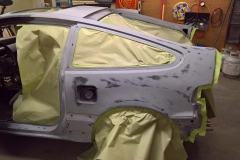 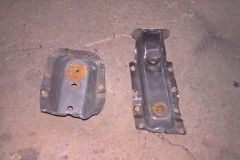 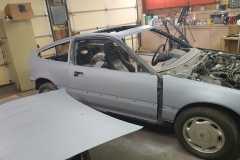