There were still a few items remaining on the list before the car could be considered ready for paint.  The first order of business was to patch up the rear floor pan.  There were several spots that needed attention in the main well where the spare is stored.  We were able to cut a piece of spare metal from the quarter panel patches and share it to the area removed from the pan.  Bondo and icing were then applied to smooth out and seal the welds.

We also had a chance to power wash the engine bay in preparation for paint.  The main brake booster needed to be removed, which proved to be more of a challenge because most of the dash was still installed.  Four bolts held the booster in place along with the piston connecting the brake pedal.  Once the bolts were removed, the booster came right out.  That was the last piece that needed to come out of the engine bay.  I made the decision to keep the remaining wire harnesses installed when the engine bay is pained to avoid having to take apart the dash.  We taped up the firewall and sprayed down the front end until all of the dirt was removed.  The file step was scuffing the firewall and bay with scotch-brite.

In a few weeks the engine bay will be painted, the rear floor pan will be undercoated, and the final touch ups will be applied before the chassis is painted in the shop. 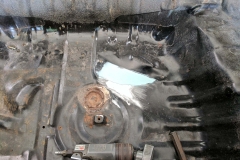 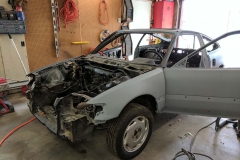 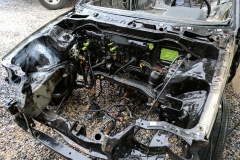 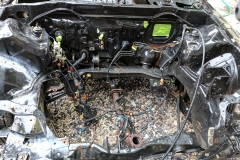