This weekend’s goal was to get the car in primer. We sanded both doors, the hatch, and the fenders by hand and with an orbital sander. There were quite a few dents in the door, so multiple passes with 80 and 150 grit were needed.

We dropped the sunroof assembly out to sand the roof. The sunroof motor will also need to be replaced. Luckily, the motor is in working order on the first CRX. When the car is reassembled, we’ll change it out and test to make sure all moving parts check out.

Now for some bittersweet news. While taking the sunroof panel apart, we noticed quite a bit of rust under the liner. I took the first CRX’s sunroof panel apart to see if it was any better. Not only was the first CRX’s sunroof panel rusted on the edges under the liner, there was a significant amount of rust on the main panel as well. I’m not sure how easy it will be to find a replacement sunroof. It seems those that have been exposed to the elements wind up with rust along the liner. We sanded the best of the two down as best we could and moved on.

The other piece of bittersweet news was the sections of the floor that secure the seats.  Both rear seat mounts that connect to the floor pan were rusted out.  The previous owner also thought it was a great idea to compensate by mounting the seat directly to the floor pan.  Not only will we need to replace the seat mounts, we will need to seal the floor pan to prevent rust.  Luckily, both seat mounts are okay on the first CRX.

The next day the windshield was removed.  It will be replaced when the car is painted, along with (hopefully) the quarter panel glass.

We seam-sealed and sanded the driver quarter panel in preparation for primer.  Afterwards, the passenger fender, hood, roof, quarters, and rear of the car was primed.  Next up:  the driver fender and sunroof panel.  Overall, it was a productive weekend.  The car is almost ready to go into the paint shop. 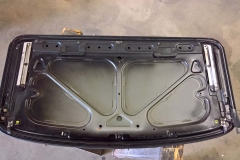 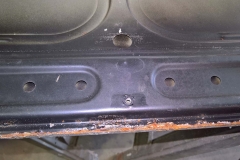 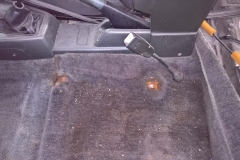 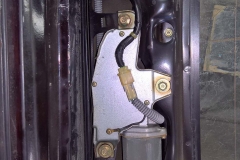 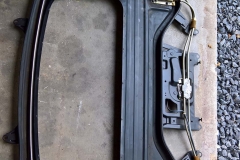 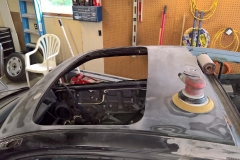 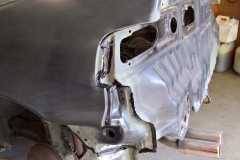 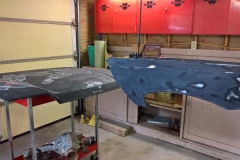 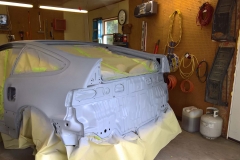 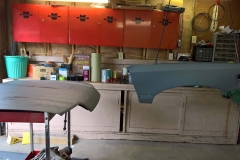 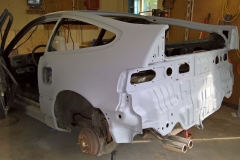