I made the decision to cut my losses with the CRX.  The body was too far gone.  Almost every main panel had some form of rust damage and the parts are very difficult to find.  Even if I could find the parts, the floor pans alone would cost over $1200 combined.  After crunching some numbers, I decided to find another CRX in better condition to serve as the basis for the restoration project.  The CRX I had purchased last year could become a parts car and then eventually parted out.

After some searching, I found a nice 1988 Si for sale in Lexington, NC.  It was being sold by Garwood Custom Cycles, who had planned on swapping the D16 engine and applying some other flashy mods to it.  Luckily they decided it wasn’t worth the time.

After talking with the owner over the phone, I made the 12 hour drive down to Lexington to see the car for myself.

This CRX was in much better shape than any other I’ve seen.  Despite its age, the chassis was mostly rust-free.  The floors and rockers were spotless.  There were a few rust bubbles forming on the quarter panels at the wheel wells, which is typical.  The trunk also revealed some rust right at the edge where it meets the rear floor pan.  The engine felt strong during the test drive.  I noticed that the transmission popped out of third gear consistently, which could be an issue related to the synchro.

The paint was not original.   The car was painted at some point recently, but not very well.  The door trim was originally colored off-gray out of the factory, but on this car the color matched the paint color of the body.  It wasn’t the cleanest black paint and it would definitely need to be redone.  Some other aesthetic items I noticed included:

I also tried to get some history of the car.  Garwood acquired the car from a gentleman in South Carolina, and before that it appeared to have an Arkansas title.  This was good news.  It spent its life outside the rust belt.

Now I need to make a decision.  Do I purchase this car? 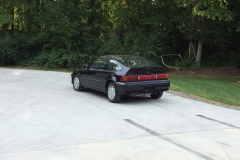