It was time to tackle the front floor pan.  Last week we cut out the driver’s seat rear anchors from the donor car.  This week my goal was to remove the rusted anchors, refinish the donor anchors, and install them.  I also wanted to undercoat the entire front floor pan.  There were some additional blemishes in the driver door and driver fender primer, so more block sanding and another coat of primer was in order.

We were able to wire brush all of the surface rust from the anchors.  We also used the MIG welder to reinforce the area around the threading, which was displaying signs of rusting through.  We also sealed them before welding them into the floor pan.  Removing the old anchors went off without a hitch.  I put a few gashes in the floor pan, but that was fixed when the replacement anchors were welded in place.  The hardest part was using the driver’s seat rails to line up the placement of the anchors.  We also discovered the floor pan was slightly lower than it should be, and we had to hammer it back to the proper height.  This was essential to align the seat at the correct angle.  Once everything was in place, the floor pan was undercoated.  I was very happy with how this turned out.  It looks better than it did on day one.

The second task was to block sand and prime the driver’s side door and fender.  There were a few imperfections noticed from the previous coat of primer.  Because this car is going to be it’s original black color, any imperfections in the body will be noticed when paint is applied.

Since we undercoated the front, I wanted to quickly undercoat the rear floor pan too.  This is where the bad news came in.  After wire brushing the surface of the rear floor pan, I noticed three distinct points where the pan had rusted through.  The circular plug was also rusted, but that wasn’t as big of a deal.  This was extremely disappointing, both in the sense that it must be fixed before it spreads and because it will delay getting the car into the paint shop.

The next step is to see if the donor car has enough of the rear floor pan intact to cut and weld.  If it does, we can remove the rusted portions and replace them with the donated metal.  We can then undercoat the entire floor pan to prevent it from rusting in the future.  If the donor car does not have viable metal, we will most likely have to fabricate the pieces.  This is the least preferred option because it will not look stock.  Either way, the rear floor pan is the next and hopefully final step before paint. 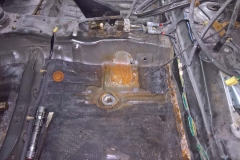 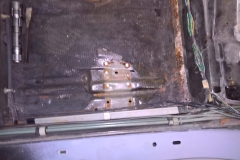 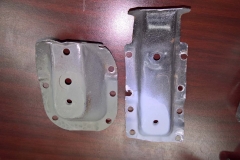 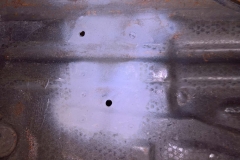 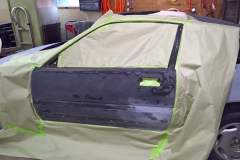 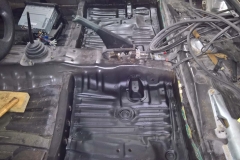 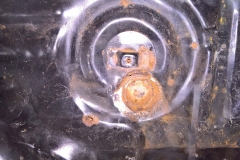 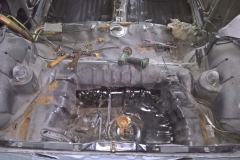 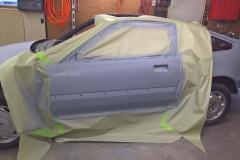